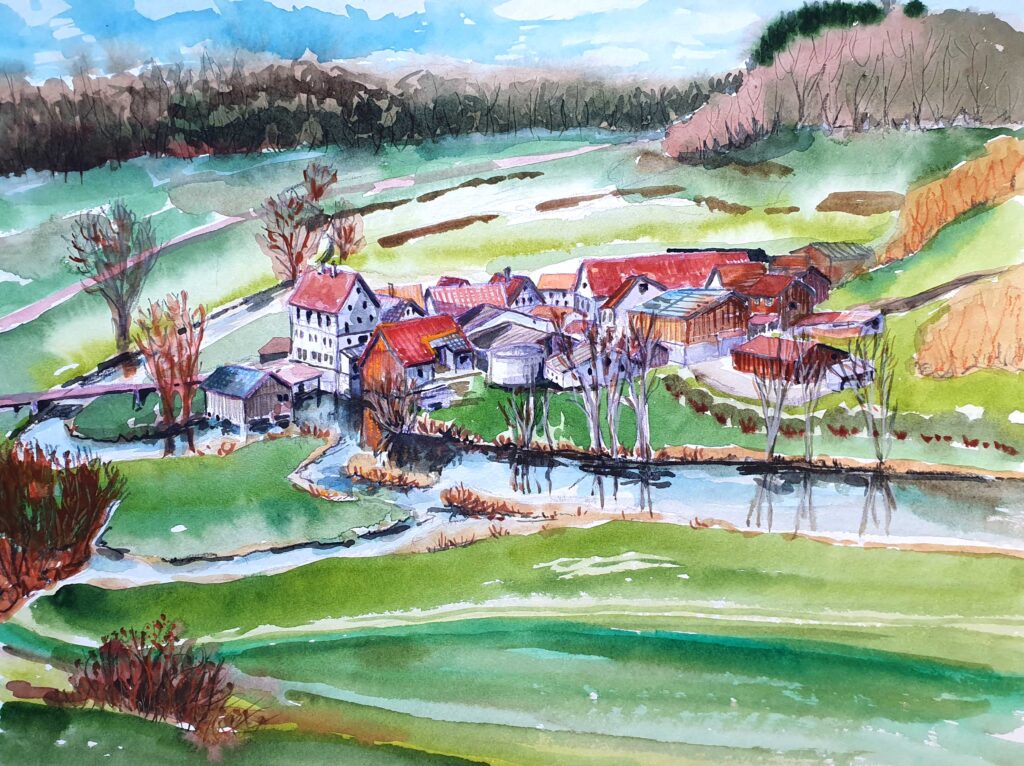 After some time since my last hike & paint adventure (and my book „Watercolours along Jagst river“)  from Crailsheim to Kirchberg, I decided to make a new start and do more „microadventures“ of this kind in the area from Kirchberg to Langenburg, always following Jagst river. The project name will be: RIVERPAINTINGS

The rules would be basically the same: 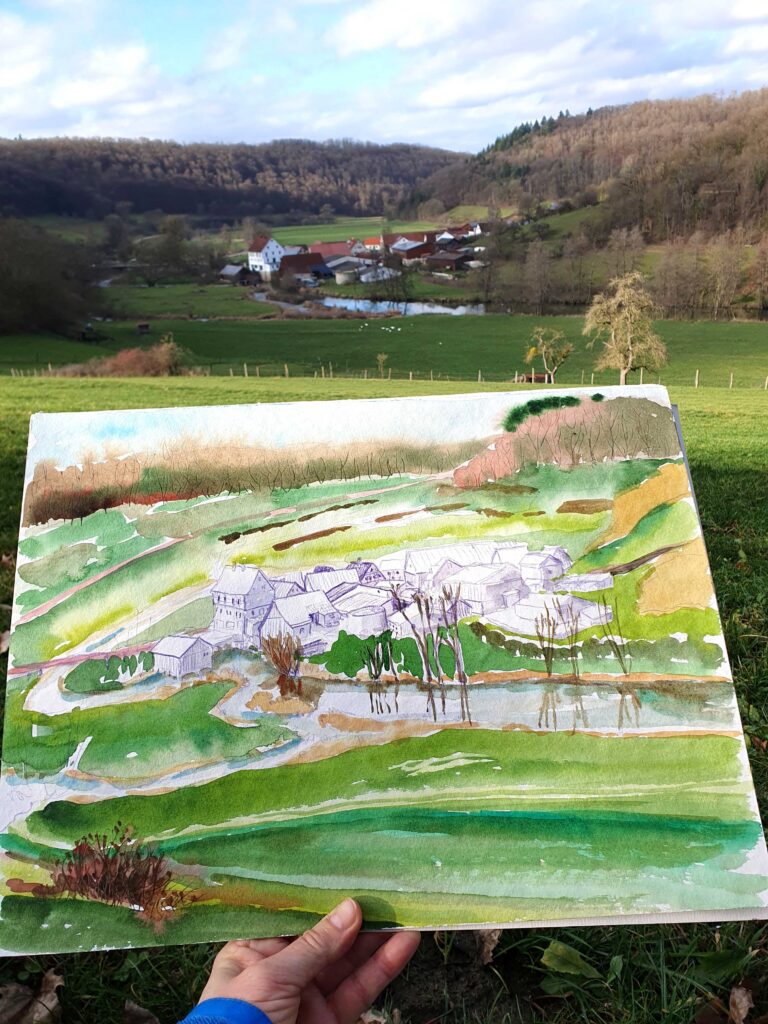 START: Drove through Kirchberg on my way and made a short car stop in Eichenau, where I made a sketch of the gorgeous stone bridge and weir last summer (see last post). Therefore I spared this location out and drove along the river to Diembot, which is very close and parked the car right at the little bridge to start my todays walk to the left of Jagst river.

My bagpack felt light and I was in good mood. The weather was unusually warm for the month of January. The water of Jagst was quite high,  like dark petrol colour and from the other side of the river I could hear some noisy tree cutting work in progress.

The way I followed,  was very close to the river and on my mobile navigator,  I could see that the river would make two complete  U-turns on the way. When I entered the forest, the trees were dotted with white dots, the noises I formerly heard aren’t any more and besides the cracking beneath my feet, it was very calm.

Then I had to go up steeper into a forest with lots of very old oak trees, often covered by light green moss.

When I was up very high over the river I could hear some orange men on the other side of the river shouting and making noice. Turned out that there was a drive hunt going on. Then some shooting…

Some fallen trees obstructed my passage here and there and very soon I was leaving the forest again. I could see Hessenau in the green valley below me. Here I needed to make an A3 panoramic sketch (see above).

After the picnic high above Hessenau and after finishing my painting I continued towards Hessenau, went over the bridge and to the „milk-station“, which was a little hut filled with fresh dairy products and other provisions. Here I bought some stuff and saw that the hunters have already finished their hunt and they caught 5 huge brown boars. Two of them were already stretched and three of them on the ground. The colours orange and green were their trend colours;) Made two rough pencil sketches which I coloured later in my studio. 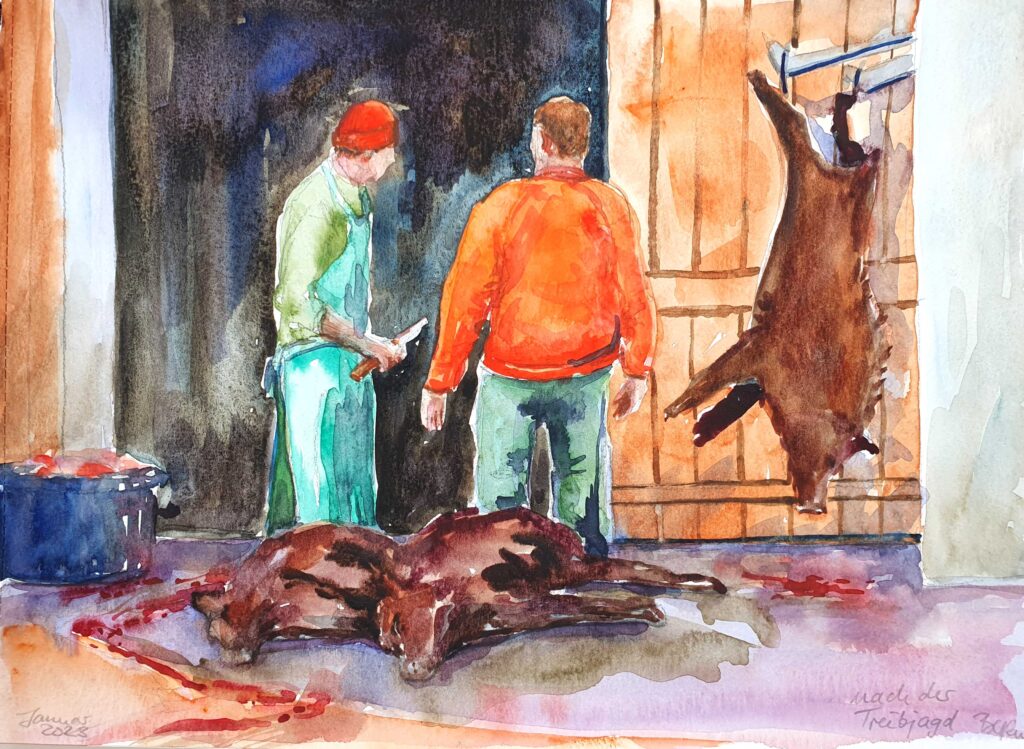 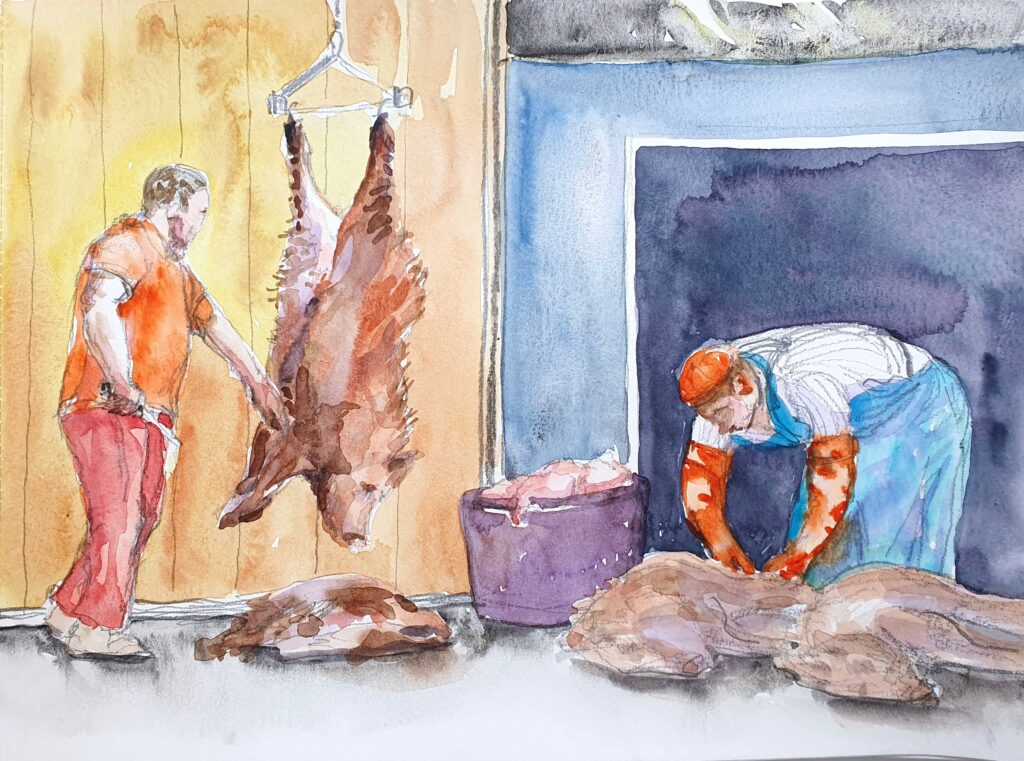 I crossed the mill, walked out of the village and continued upwards into the forest again. This time I was at the other side of the river for the way back. Consecutively Hessenau will be the starting point for my next tour. From now on I was on my way back.

The only flowers I saw was „Nieswurz“, a Helleborus plant. It was directly above my path and I also only made just a pencil sketch as it was already late and beginning to get colder… 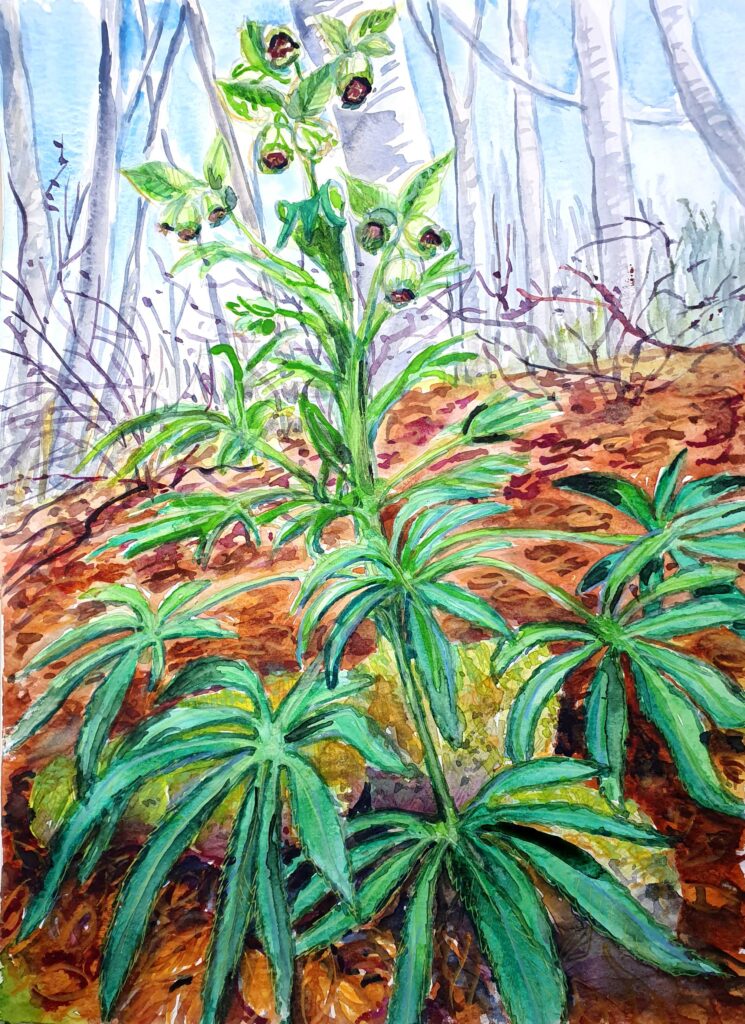 Saw a deer, five dead boar, lots of green and orange hunters and a really enchanted acorn-linden forest half way on the way back to my car.

The weather was fine, with some wonderful sunshine in the afternoon at about 6-8 ° C, which is warm for January.

All in all I walked more than 10 km, therefore sketched more than painted… time flew by and it gets dark early. The conditions were perfect and it was a good start.

Maybe next time I would walk less and paint more. Can’t wait for the next hike&paint adventure. 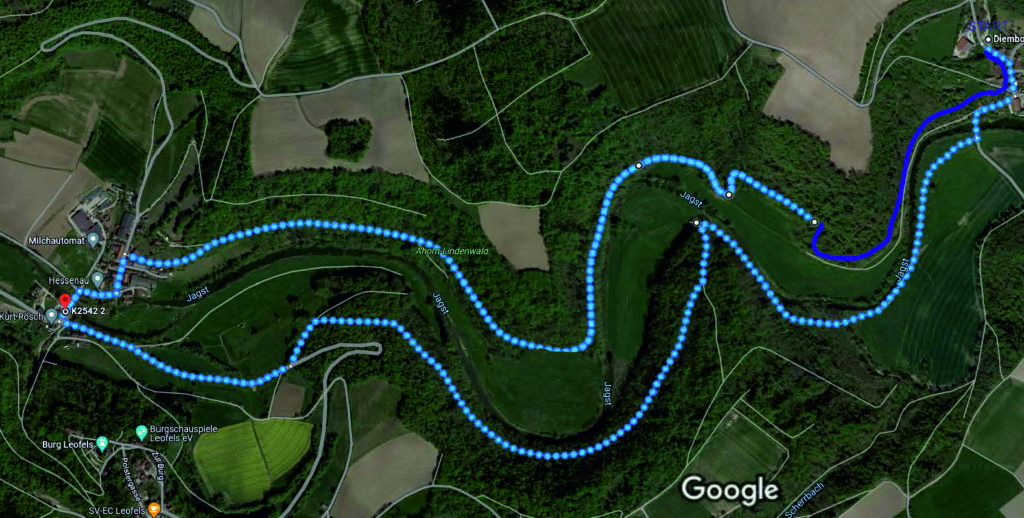 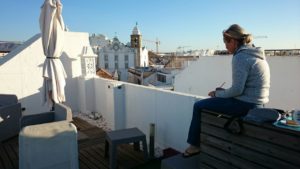 My name is Bettina Ruppert. Drawing and painting makes me happy. I would like to share my fun with you. Colour your life, try new things!

This website uses cookies to improve your experience while you navigate through the website. Out of these, the cookies that are categorized as necessary are stored on your browser as they are essential for the working of basic functionalities of the website. We also use third-party cookies that help us analyze and understand how you use this website. These cookies will be stored in your browser only with your consent. You also have the option to opt-out of these cookies. But opting out of some of these cookies may affect your browsing experience.
Necessary immer aktiv
Necessary cookies are absolutely essential for the website to function properly. These cookies ensure basic functionalities and security features of the website, anonymously.
Functional
Functional cookies help to perform certain functionalities like sharing the content of the website on social media platforms, collect feedbacks, and other third-party features.
Performance
Performance cookies are used to understand and analyze the key performance indexes of the website which helps in delivering a better user experience for the visitors.
Analytics
Analytical cookies are used to understand how visitors interact with the website. These cookies help provide information on metrics the number of visitors, bounce rate, traffic source, etc.
Advertisement
Advertisement cookies are used to provide visitors with relevant ads and marketing campaigns. These cookies track visitors across websites and collect information to provide customized ads.
Others
Other uncategorized cookies are those that are being analyzed and have not been classified into a category as yet.
SPEICHERN & AKZEPTIEREN